Is Sean Salisbury crazy, or crazy like a fox?

The answer could lie in a question many of you might be asking right now: “Who the heck is Sean Salisbury?”

Salisbury was a middling pro quarterback who logged 10 largely forgotten years in the NFL and CFL from 1987 to 1996. Subsequently, he became a middling in-studio football analyst for ESPN, building a largely forgotten broadcasting career at the network that came to an abrupt halt in 2008. Although Salisbury claimed the decision to leave was his because he felt he wasn’t being paid his due, rumors flew that one of the reasons that led to his departure was a suspension for showing a cell-phone picture of his most private of areas to several women. Salisbury denies, and continues to deny, that allegation, but the blogosphere, which has followed this story as if it were the Watergate tapes, is not inclined to believe him.

Salisbury bounced around after leaving his ESPN, turning up on a Dallas radio station, where he was recently fired for what some suspect was more alleged shady behavior. Salisbury again claimed innocence. 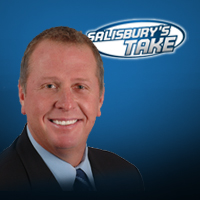 Now Salisbury is on the legal attack. But although he claims to have hired a high-powered lawyer and a high-powered PR firm to help him take down his enemies and restore his tattered reputation (while he claims to be writing a book that will reveal secrets that will take several ESPN personalities down, which would seem to open him up to charges of contradiction), you have to wonder about what is really going on.

The question is, what high-powered lawyer or PR firm would ever allow a client to send a flood of barely literate, threatening and ultimately incredibly loopy iPhone messages to prominent sports blog Deadspin, which has breathlessly and snarkily reported Salisbury’s strange career arc for years now?

Here’s the thing: Salisbury knew Deadspin would post his messages. In fact, as you can see in his correspondence, he practically goads them to do so. So is this an incredibly disturbed individual, or is this really a viral marketing campaign for Sean Salisbury 2.0, the fantastically unhinged sports broadcasting personality? Is Sean Salisbury on a campaign to become the Glenn Beck of sports?

Is this a PR nightmare or PR genius? Only time (and presumably much more poor grammar, spelling and sentence structure) will tell.

We’ll have a good idea if he’s ever pitching iPhones.

Well. We see quite a few PR nightmares come and go in this country. But the saga of Mark Sanford, erstwhile governor of South Carolina, is going to stick with us for a while. In fact, let’s preemptively award Gov. Sanford with the distinction of PR Nightmare of the Year.

Where to begin? How about the beginning.

His wife says he had to get away from those pesky kids to write something. His staff subsequently says he was hiking the Appalachian Trail to recharge after a tough legislative session. But no one can say definitively where he is. If an emergency were to happen, no one knows where the state’s chief executive is.

The truth is that he is not writing, nor is he hiking. He’s in Argentina, cheating on his wife with a woman with whom he’s been having an illicit e-mail relationship for years. An intrepid reporter confronts him at the Atlanta airport yesterday morning, returning from Buenos Aires, and he lies to her, saying he was alone, driving the “coast” of Argentina. He returns to the Palmetto State and holds a disgusting mea culpa press conference later that day with constituents smirking and snickering behind him, in awe. He doesn’t resign his office. Later in the day, embarrassing and sappy e-mails between Sanford and his Argentine lover emerge.

Now… just how big of a PR nightmare is this?

His PR guy, Joel Sawyer, looks like an uninformed idiot, of course. He came off like a sucker for a week, and I can’t imagine this stint will be the proudest item on his resume.

Just in case you think I'm being glib, here is the family that the governor abandoned for a week.

But more importantly, and quite impressively in a sense, Sanford managed to undermine nearly every element of his branding and messaging in one fell swoop.

Consider: Sanford is a small-government, conservative, family-values, “take responsibility for yourself,” “America first” Republican with presidential ambitions who cheated on his wife with a foreigner, walked away from his extremely important job without taking personal responsibility to get his work-related affairs in order, ditched his four sons on Father’s Day, and possibly used public money and property to travel to an airport and fly to a foreign country. Besides the fact that he didn’t seem to care if the government could function (many hardcore conservatives have been very upfront about how they would like to destroy many functions of government from the inside and transfer that power to the private sector), he spit in the face of every conservative ideal for which his wing of the Republican party stands.

Effectively, Sanford has not only embarrassed himself, his family and his state, not only has he completely undermined his PR team, but he has also delivered a huge blow to the national Republican party and the conservative movement in general with the latest and possibly greatest example of mindboggling hypocrisy that can very conveniently and effectively be used against it.

Who knew that Rod Blagojevich and Jim McGreevey could actually be eclipsed. Well maybe not, but it’s definitely a tight three-way competition now.

So…Bravo, Mark Sanford! P.S., you need to resign because you have no credibility. Probably should have consulted your PR guy before you left on your exotic romantic getaway.

How not to roll out a new product

Unless the goal was to attract some sort of “Mr. Fix-It” venture capitalist with a hero complex, I don’t quite get what the ambitious dreamers behind Cuil were up to this week when they launched their allegedly-Google-killing-but-actually-completely-not-ready-for-prime-time-or-even-4-am-as-a-program-listed-as-“paid-programming”-on-channel-576-for-that-matter search engine, backed by a mountain of braggadocious hype aimed at the very uber-techies who they surely must have known would (rightly) tear their project to shreds. Cuil’s PR guy surely is not having his best week ever.

And if their goal was, indeed, to attract some sort of “Mr. Fix-It” venture capitalist with a hero complex, I fondly wish them the very best and ask them to kindly pass the message on to him that, boy, do I have a few half-baked, pie-in-the-sky ideas worth very expensive fixing!