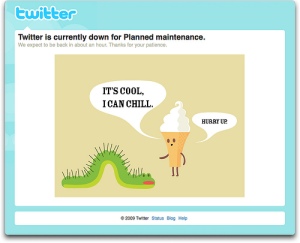 Well, maybe not, but it sure ain’t sticky and it’s not looking like it has legs. According to this article, called “Twitter users not sticking around”, more than 60 percent of Twitter users stop using the service a month after joining. That eqautes to a 40 percent retention rate. At a similar stage, says the article, Facebook’s retention rate was twice as high. Same with MySpace. I have to say that I am one of those people who went Twitter-crazy for a month and then got tired of the limited functionality and never-ending glitchiness of the site and returned full-time to the wicked but loving arms of Facebook.

While it has some legitimate applications, on a macro level Twitter has all the makings of a fad that we’ll all laugh about fondly in a decade. Celebrity and newscaster tweeting has already become rote fodder for TV comedians. TNT basketball analyst Charles Barkley, never one to pull punches, even implied the service was pointless and annoying during an in-show commercial Tuesday promoting TNT’s Twitter accounts. Back in the day, we’d have said Twitter has jumped the shark.

From a PR and marketing perspective, that doesn’t mean we need to abandon Twitter. Quite the contrary. We need to exploit its capabilities as much as we can. But we also need to keep in mind that its influence may very well have peaked.

From my view, Facebook is a much more effective play for all but customer service applications.

This entry was posted on Thursday, April 30th, 2009 at 1:00 am and is filed under PR. You can follow any responses to this entry through the RSS 2.0 feed. You can leave a response, or trackback from your own site.